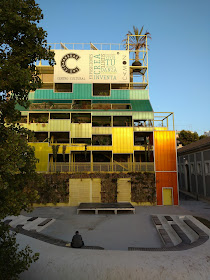 We like to visit places like ‘Las Cigarreras’ in Alicante, because there is often interesting things happening. This time we hit the bullseye as they were exhibiting the spanish artist Gemma Herrero's work: "Children's Game" - Augmented Reality for cellphones (see Gema Herrero 2016 Instalación en Las Cigarreras). The augmented layer include some video material, animations and sound recordings, displayed in a virtual gallery accessible via images and QR-codes. There is also an interesting workshop going on.

"Each virtual gallery and different sound installations includes soundtracks: the streets’ soundtrack. Several cities are mixed up and intertwined as they follow the pace of their inhabitants’ words and the rhythm of the anonymous musicians as they play their repertoire in public sites."

This could almost serve as a description of Auditor – which is funny: yesterday we delivered a paper ("Location-based plotlines in sound: Results from a field trial of a prototype medium and story") were we discuss Sonic Augmented Reality.

Back to  "Children's Game". I have to apologise for the terrible sound quality. There was quite a lot of noise in the room, but the main reason is that I only had a cellphone, which is pretty broken, with the microphone taped over: